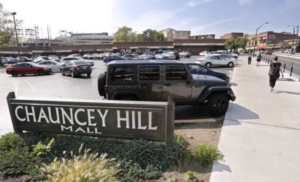 OnCampus Brands is excited to be working with Trinitas Ventures with their recently announced redevelopment project at the Chauncey Hill Mall in West Lafayette, located near Purdue University. Construction on the estimated $250M mixed-use development is slated to begin by the end of 2019, with a projected open date of late 2021.

Trinitas CEO Loren King, who had a 50 percent stake in Chauncey Hill Mall, took full ownership in the summer of 2017—allowing him to pave the way for something he believes will be “transformational” for the community given its prime location. While Lafayette-based firm Trinitas has university-town projects in seven states, this will be the first in their home community near Purdue.

Aaron Bartels, the Senior Vice President of Mixed-Use Development at Trinitas spearheading the project, said in a recent interview with Inside INdiana Business that the finished product will create “a true sense of place in downtown” for both the city and nearby Purdue University. “This is really creating kind of that urban sense of that vitality and energy by having all of the uses where workers want to live above where they can go to lunch. Residents want to live where they can buy groceries and walk to restaurants and entertainment. Guests want to stay in hotels that are in active, downtown, vibrant environments,” he said. “Campus-edge, mixed-use environments are becoming more and more popular.”

Indeed, mixed-use developments that blur the lines between campus and community are becoming increasingly popular, and we at OnCampus Brands have been working to create more porous campus borders with brands and concepts that resonate with both students and locals.

Plans are currently underway for a weeklong collaborative planning process in the former University Spirit location in Chauncey Hill Mall the week of July 9 in order to receive feedback from members of the community. The meetings will be led by the Washington D.C.-based architecture firm Torti Gallas & Partners.