Less than 50 brands have celebrated this milestone, and Smoothie King is the first health-forward concept with a focus on nutrition to make the list. 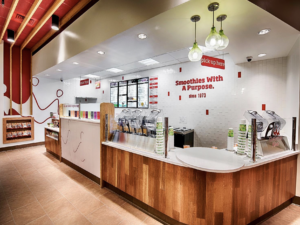 Smoothie King celebrated the opening of its 1,000th store on Thursday, Aug. 23, at 1325 E. Belt Line Road in Richardson, Texas. The Richardson location, which is company owned, is a short drive from the company’s new corporate headquarters, located in Dallas. The company moved in June 2018 from Metairie, Louisiana.

The milestone comes on the heels of the leading smoothie company’s recent record setting sales and franchise growth. “This is an incredible milestone in our company’s history and in our journey to inspire people to live healthy and active lifestyles,” CEO Wan Kim, said in the release. “It’s even more special that we’ve reached this goal right here in our new home market and can celebrate with our neighbors and friends.”

In the first half of 2018, Smoothie King opened 49 locations, and it projects to open a total of 130 locations by year’s end. It was recently recognized as the top juice bar franchise by Entrepreneur magazine and is enjoying five years of consecutive same store sales growth.